This is my second Memory Monday (a vehicle of my own creation to help me remember and record my good memories before I forget them!)

When I was growing up, we used to go see my mom's aunt and uncle on Martha's Vineyard. We called them "Dop" and "Pop" and they were quite a pair! Dop was the more no-nonsense of the two, while Pop was quite sentimental and LOVED a good game of Scrabble. I remember eating cinnamon raisin bread there and that smell always reminds me of their house. 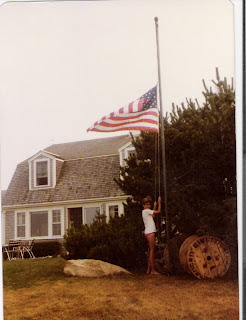 This is a picture of their house with me taking their flag down for them. They lived on a hill called "Heather Hill" and they overlooked a bay. I could run down the hill, across the highway and into the water in less than 2 minutes. And I did, frequently! :-) There was a lot of seaweed off the dock, which scared me at first, but after I got used to it against my legs, I didn't mind at all. We had to wear our shoes in the water, anyway, so I would float with my sneakers peeking out of the water. Pop loved to take pictures of that! 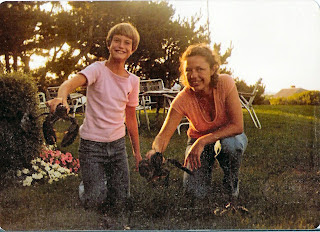 Every visit, we would get fresh lobster and have lobster races before boiling them. As I said, my great aunt was very no nonsense, so I had to put my own lobster in whether I was upset by boiling my "pet" or not.

They lived very near Jackie Onassis' estate. My mom and I once kayaked over to that area and accidentally landed on her beach. We were very quickly escorted off the beach by men in suits. I will never forget the men with the suits and sunglasses on the beach in early morning. It was very eery.

In my first three years of school, we lived in Denver. My best friend was a girl named Karyn. We stayed in touch through college. When I was in my teens, her family moved to Cape Cod. She would come over from Cape Cod to the Vineyard and we would get to spend time together. Her family had a beach house on Chappaquidick, too, which was fun to visit. She and I went snorkelling quite a bit and our favorite beach at which to snorkel was the one where they filmed many of the scenes from "Jaws."

It was a lot of fun getting to the Vineyard from the mainland. There were two options: the ferry or the extremely small plane. I enjoyed both of them although I think I liked the ferry better. I have always had a real liking for boats and a boat that you could drive cars on fascinated me.

Dop died first and Pop died more recently. They left their house to their three daughters who sold it and split the assets. One of the daughters very kindly sent me a silver tea set from their estate, knowing how much I enjoyed my time there. Pop gave me my love of Scrabble and Dop my appreciation for no-nonsense people. There's something to be said for Yankees... you always knowing where you stand with them.
at 7:45 PM

Fantastic memories. I love reading blogs for post exactly like this. Your story's brush with Jackie my have seemed eerie, yet pretty amazing. These are the stories that frame the diaries that are selling like crazy for the boys and girls, except yours is real memories, not an author trying to recreate the past.

I love the scrabble part, I am such a sentimental one that I would write this story up and create a cover like a scrabble board...what a fun family history to pass down!