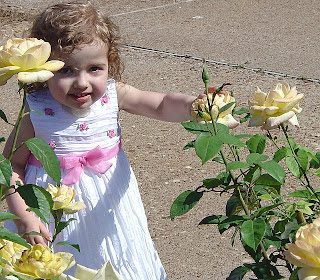 Well they are on their way to pre-op right now. I will keep y'all updated. It should be all over in about 2 hours, if they stay on schedule (the actual surgery is very short!) and hopefully they will be set free, and on their way home, 24 hours from now.

Explanation of the surgery: Kaedra has vertical expanding prosthetic titanium ribs. (aka VEPTR or titanium ribs) Here is an idea of what they look like: 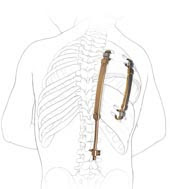 (however Kaedra does not have as many natural ribs as the picture) She has two of the VEPTR devices (just like the pic). Approximately every six months she has to have them extended vertically so she can keep growing. She will grow in between 1-2cm this expansion and then she will also have some growing room until the next surgery. The surgery for the expansions is laproscopic and fairly quick. The longest part of the procedure has more to do with ventilating her, rather than working on the "ribs." She has to be switched to a different trach and put on their ventilator before they will begin the surgery. Every few years, they have to change out the VEPTR devices and put in a larger one (until she hits around 13 and her trunk is considered fully grown). Those surgeries are far more complicated and are much longer. The "expansions" are really fairly easy and relatively painless, from what we can tell. She usually does not stay on pain meds for more than 4 hours post op.

Another note:
Kaedra's Respiratory Therapist, Kent, came out the other day to give her a lung volume test. When he hooked the device up to her trach, the device would not pick up any breaths. (I could have told him that she barely uses her trach to breathe!) He said it would be "no problem" to decannulate her. (decannulate = get her trach out) HALLELUJAH! Another answered prayer. I believe that as soon as we can get her off of her vent 24 hours a day, we can take that trach out. HALLELUJAH! (I am REALLY excited! God is SOOO Good!! He's a mighty working God!) We are very close to getting her off of the vent 24 hours. She is ABLE to do it now (and has done it on occassion), however she might be tiring herself out a little while doing it. We are still weaning her off of the vent slowly to get her body used to it. Right now she is only on it 5 hours a night. If we do 1 hour a week, after giving her time to recover from surgery, we could have her off of it by the end of summer and decannulated by her birthday!

God has big plans for this little girl and the enemy will not rob her of them! I thank everyone for your prayers! God is working through them and Kaedra is the evidence of it all! HALLELUJAH! Thank you Almighty Father! 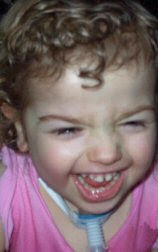 update 8:00am. They just took her to surgery. There was some concern over rattling in her lungs and whether or not they would do the surgery but they did decide to go ahead.

update 10:00am. She is out of surgery and all went well. Michael will see her when she gets to ICU. She will be there until they let her go tomorrow morning. The only thing they are concerned about is how skinny she is. They only did an expansion on one of the rods. They weren't pleased with the look of the skin over the other one. They are hoping we can "fatten her up" a bit before the next surgery. They are going to send a dietician in to talk to Michael about her nutrition. Maybe the dietician will have an idea about how to get her to eat, as well!
at 10:00 AM

Praying for her this morning. Love you guys!

what a special little girl and a wonderful family she has. i will be praying for her this morning.

Glad all went well. How wonderful about the trach situation.

I will continuing praying,

That would be great if the dietician can offer any ideas!!!

So glad things went well. Wish people were wanting to fatten me up! LOL ~Kim B.

Just visiting from Brandi's blog. Wanted you to know that I'd be praying for your beautiful girl today!

I am so glad everything went well! I bet you can't wait to see her!

I'm visiting from Brandi's blog too (although I visit most days :) I've been praying too, glad she is doing well :)

Praise God.
I am going to continue keeping you all in my prayers!

I'm a day behind in my blogs, but I'm glad to hear that surgery and recovery has gone so well. Praise God for the trach news!! I'm very happy for you all!