In honor of Emily, whose 6th birthday is today, I wanted to write about her. I seem to have lost my creative juices temporarily and I have been struggling with this on and off all day. So, for the sake of still giving her a blog entry, I decided to use the Thursday Thirteen idea and I am writing:
13 things about Emily 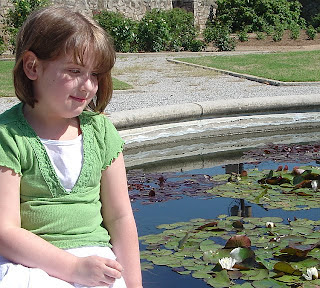 1. we tried for over a year to get pregnant with her
2. I found out I was pregnant the day my homeschool group started. I was then sick for the next 6 months and didn't see them again until the new year. They still threw me a shower!
3. Although the doctor said she was a girl, I didn't believe him until she was actually born. (I even decorated her room blue and got her a blue stroller)
4. The doctor almost didn't make it in time for her arrival. Although he was less than a mile away, his clutch broke and he had to repair it with a rubberband and a paperclip.
5. When it was time to push we called my father in law and asked him to bring Brittany right away. Because he didn't believe us, he took his time and they showed up almost two hours later. I wouldn't let the nurses take Em until Britty got there, so they weren't very happy with me. They let us keep her for 5 minutes more after B got there and then they took her away.
6. She was a spittin' image of her daddy until she was about 18 months old.
7. she was very colicky and we had to dance around with her to keep her happy, especially in the evenings
8. She was the apple of her Paw-Paw's eye during his last year and battle with cancer.
9. She has an Eyore-ish personality.
10. She wants to be a rockstar/doctor when she grows up
11. she is very good at taking care of people and trying to guess people's needs
12. Although she is a riot to be around, she doesn't usually like to be laughed at/with. And if she laughs too hard she gets confused and ends up crying.
13. She gave me the gift of teaching me I had room in my heart for more than one child with more than one type of personality.

I LOVE YOU EMMY!!! Happy Birthday!!

(I just went back and looked at last year's post. It has almost all the same info!! She hasn't changed much in the last year either...especially the last paragraph. Oh, and she still wants to marry Jacob)
at 11:19 PM

We have an Eeyore, too. Its great how no matter how many kids you have they are all different.

Happy Birthday!!
Emmy sounds a bit like Mini-Me.
Gosh - doesn't the time go by fast? We realized today that it was legal for Mini-Me to ride in a car without a car seat. I had to read the information sheet I have. It says 8 years old or 4'9". I was thinking, "well, she's too short...WAIT! O gosh. She's 8. Not only is she 8..she's almost 9!" *Sniff* So on that note - give this 6 year old a really fantastic hug and tell her it's from me.

Happy Birthday Emily! What a fun tribute to her.

I had a hard time believing the doctor when he told us we were having a girl, too - LOL!

I do hope that Em will read your post one day when she is all grown up.
I bet she will treasure it.
Happy late Birthday Emily!
Kind regards,
Jeannine

I'm a few days late, but a big HAPPY BIRTHDAY to you Emily!!