The very raisin-ness of Ethan 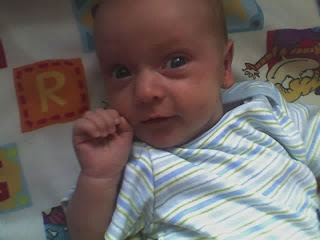 There! did you catch that?

Did you catch it this time? No?

There is something very raisiny about Ethan. No, he isn't purple or wrinkled and he doesn't dance around to "Heard if through the grapevine" with sunglasses on. (although that would be really cute!)

(I bet you forgot to scratch and sniff your screen above.
Go on back up, I'll wait.....

oh, do you not have that feature?? Well I promise, he SMELLS EXACTLY like a box of just opened raisins. Or maybe it is more like a pudgy, child hand grasping them on a hot summer day. Something in between those two)

And, no, I don't eat a lot of raisins. Or even grapes. And I don't drink wine.
It is a true mystery! This raisin-ness is all his own.

(and this will now go into the archive entitled "things to embarrass Ethan with later" surely to be pulled out when he has met his special someone.)

(unless he still smells like raisins, and then that could be a problem)

(unless he finds a special someone who LOVES raisins)
at 11:57 AM

He is such a cute little raisin guy. :-)

LOL!!! I don't ever recall catching a whiff of raisins while holding Ethan! Maybe I missed it! I'll have to pay extra close attention to the aroma coming from him next time I have him.

that's too funny. i've never heard of anyone smelling like raisins like you've described. he must smell yummy =)

Khari, you are hilarious! It's too funny that he smells like raisins, but your post is hysterical! Thanks for the laugh!!

That is too funny! He is a cutie, and I love the pictures. This post is truly a treasure:)

He is beautiful ... and I will trust your sense of smell :) !! Hopefully he won't be like Cory when he is older and stick raisins up his nose.

I can think of a lot of worse things for a baby to smell like:o(
Oh, I love the smell of raisens! He is so cute. I thought he was throwing them at us!!! I was dodging.
Susan

So funny - you'd better be on the lookout for girls who love raisins (you know, just in case).

Thanks for the laugh.

Too cute!! He is adorable! (Even if he smells like raisins.)

That was funny!
Brianna says Ethan is really cute "for a baby"
Miss talking to you guys, and Kaedy looks so darn nice!!

He's so cute!
I just replied to your two comments not realizing they were to no reply... sometimes I do silly things. Anyway, thanks for both sweet comments.