The "Worst of Times"

As I have mentioned, we are studying Oklahoma History right now. We have about 3 weeks left and it is going great. I love all that we have learned. Not being from Oklahoma, this has been lots of fun for me. I am not having to re-hash history I have already learned (however poorly) but am able to read this all with a fresh eye and mind.

Yesterday we learned about some of the seedier sides of Oklahoma history. First, we learned about the Tulsa Race Riot. Although learning about the race riot was extremely interesting it was more interesting to hear Michael's comment when he got home. As a bit of background, Brittany and I had heard that the Tulsa Race Riot was hidden for years. In fact, one of the most important, if not THE most important, cause of it, a newspaper article, was destroyed in the 1930s to keep people from learning about it. I asked Michael if he was taught about it during school and he said that he was. Then he said "it's a shame that all those black people burned down their own neighborhood." WHAT?!?!? (for those of you who don't know about the Tulsa Race Riot, Brittany will be writing a paper today and I will post it. It will explain more. However, the black people did not burn down their own neighborhood, the whites burned it down!!) Talk about Revisionist History!! It was horrible learning about all the destruction the whites caused and then to hear that it was propagated into the 1970s and 1980s with mis-teaching is incredible to me. At least it is all out in the open now. There was a commission formed in 1997 to research the Tulsa Race Riot. That was right about the time I got to Oklahoma and I remember hearing about it, but I wasn't much interested in it at the time. It has now been discovered that the Tulsa Race Riot was the worst Race Riot in the History of the United States. And another thing that is amazing to me, is that most of the damage was done in less than 24 hours. Here is a quote from Wikipedia about it: "During the 16 hours of rioting, over 800 people were admitted to local hospitals with injuries, an estimated 10,000 were left homeless, 35 city blocks composed of 1,256 residences were destroyed by fire, and $1.8 million (nearly $17 million after adjustment for inflation) in property damage." There are also estimates of in anywhere in between 35-500 deaths. The best reports seem to think there were a little over 300.

The second "seedy" thing we learned about yesterday was both Oklahoma history and our own family history. We have an outlaw in our family named "Wiley Lynn." Although he was a Federal Prohibition Agent, he was very corrupt and most likely, worse than most of the people he arrested. He is famous for two things, killing the famous Oklahoma lawman, Deputy U.S. Marshal Bill Tilghman and for the "last great shoot-out in Oklahoma" where he, himself, was shot at a drugstore and then walked across the street to pick out his own coffin. I originally heard about the latter story from Michael's dad when we were at a family reunion in Madill, Oklahoma, the very place of that last great shoot-out. Later, the shooting of Tilghman was made into a movie called "You know my name." We rented the movie from Blockbuster and watched it last night. At one point in the movie, they mention Michael's great grandmother, "Granny," whose name was Hazel Lynn. They also talk about some of Wiley's uncles, who would be Michael's great uncles. Wiley Lynn was a horrible person with many bad habits including beating on his wife, liquor and drugs.

It is easy to think we are in the "worst of times." Michael and I frequently shake our heads and wonder how things can get worse. The interesting thing about history is you learn that other times have been very bad as well.

The Tulsa Race Riot looked like hell on earth. 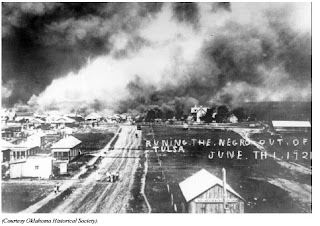 Any person, white or black, that was living during those 16 hours and the days afterward had to have thought it was the "worst of times."

The old west was no picnic either. Our area was ruled by outlaws and law men who acted worse than the outlaws. There were drugs running rampant and houses of ill repute. I am sure the law-abiding, Christian folks thought that the end must be near.

Learning about history has taught me that bad times have always been here. (Think Noah and Lot...) It is still, and always will be, (until Jesus comes,) our attitude about the bad times that determines what kind of life we live. We can choose to keep our eyes on Jesus and off of the world and live the life of abundance that He has promised us. Yes, we are awaiting His return. And yes, we should always be ready. But we should not be so caught up in the world that we despair.

Whether today, tomorrow or in 100 years, Jesus is Coming!

I loved your blog about the Tulsa Race Riot and the fact that you are related to an oklahoma "outlaw!" Loved the photo too. Keep up the good work! Cindy Downes