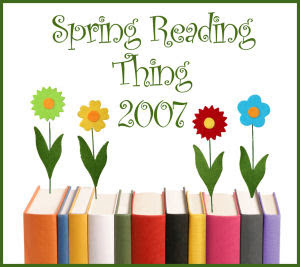 This is my first review for the Spring Reading Thing.

The Hadassah Covenant is the sequel to Hadassah: One night with The King. While it is not necessary for you to read them in order, I think it adds to the second story (and the first one is sooo good - you don't want to miss it).

In both books there are two stories being told: the story of a the biblical Esther (or Hadassah) and the story of a woman living in current times with the same name. This sequel picks up several years after the first book in both storylines. The biblical character is older in age and her king has died. The current day figure, a bride-to-be in the first book, is now wife of the Prime Minister of Israel. The book leads you through battles, deceit, intrigue, love and Faith in both time periods. Although I had a stronger identification with the biblical Hadassah in the first book, I seemed to identify more with the current day character in this one. Another difference I found in the books was: I learned a lot about myself and marriage in the first book, while the second one was more of a fun read.

Although it was fun, and quite action-packed, the second book has a lot more about current Middle East politics which caused me to pay careful attention to understand all that was going on. There is a lot of time spent searching for documents of the ancient Hadassah that have grave import for the whole world. It is a very exciting book, full of action and suspense. It reminded me, in part, of The Da Vinci Code, although, obviously, it was not sacreligious.

Tommy Tenney, a preacher and non-fiction writer, wrote both books with the help of Mark Andrew Olsen. I very much recommend both Haddassah books for good reads. (They also wrote a version for children called Hadassah: The Girl Who Became Queen Esther) Just as a side note, although I was very excited about it, I did not much like the movie based on the first book. I think the book is very worthwhile to read, whether you were a fan of the movie or not.
at 6:04 AM

These books sound wonderful. Thanks for posting about them. I will have to go locate and READ them.
Blessings,
Trella