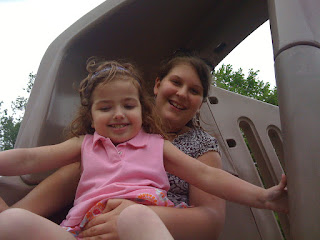 Okay, first of all, I didn't really like our surgeon already. He has always put Kaedra in a box with "these kids." He seems to forget that she doesn't have a syndrome and that she is basically healthy! He even referred to Kaedra as "terminal" once!
This time he told Michael, "she already has her trach out, what else do you expect out of her? She is already 90% better than most of "these kids!" You can't expect much more." ACK!!!! Plus when we said that we concerned about the deep "s" in her back and that her pulmonologist said she needed surgery he said "well if all you are concerned with is how she LOOKS you need to re-evaluate having a special-needs child." Basically his main point was that they don't do the surgeries as frequently anymore. He said he didn't even want to see her for another year. (which would be almost 2 years from her last surgery!!!) He said it was too much stress on her body to keep having surgeries and that she wasn't going to grow much anyway, so she doesn't need it. (she is already tall for her age!)
Anyway, we need a second opinion. The problem is...where? who? We are going to research where we can take her for another opinion! I may make an appointment with San Antonio (since they are probably booking months out) and then pray we get transferred sooner so we can see another dr somewhere soon.

This is not unusual with Kaedra. If we had listened to the doctors a little over 4 years ago we never even have had her trach'd because she "wasn't going to make it." It was also suggested that we put her in a "home" since she was never going to have any quality of life. We never gave up on her back then, we certainly aren't going to now!
at 1:45 PM

AMEN!!! She is going to keep on proving these people wrong. She is healed. We are praying for her and you too!!

Speaking as a fellow "one of those people" don't listen to a word they say. I do all sorts of things the doctors said I never would. While giving birth to Andrew, one doctor told me that "people like you don't have babies." Guess he was wrong there...three times. And don't be afraid to change doctors until you are all happy. Expect great things from your little girl--there is a plan!

Excuse me, but why in the world did he become a doctor to begin with??

Kaedra has the best physician there is and He is already healing her.

He will also direct your steps to the earthly physician that will be the best for her.

I'm praying He will quickly direct your steps.

I really, really need prayer.. do you think you could visit my blog and bring any other Sisters in Christ over too?

I really, really need prayer.. do you think you could visit my blog and bring any other Sisters in Christ over too?

Praying for continued wisdom and strength!
I've missed you on FB.
Sending big hugz your way!