This was written to a friend for her to pretend she was at the party...it will give everyone an idea how it was! Enjoy!

Okay, so you got here about 12:20, straight from church and you probably followed Michael and the girls. I wasn't quite ready, so you sent the kids outside to play with the girls and you came upstairs to talk to me while I curled my hair. Sherria came about 15 minutes later and she came up to talk to me too. Melissa (one of the hostesses) came while we were upstairs, so I finished up and we all went downstairs. I came to show you and Sherria Kaedy's very first picture because I had put it as the computer desktop. Then we went into the kitchen and looked at the cake which was HUGE - a FULL SHEET! And Beautiful!! It was different colors and flowers and butterflies. 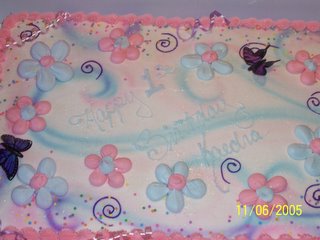 Paula got here about that time and set up balloons and decorations. Then some people from our church arrived and we sat down with them on the couch in the living room, since Kaedy was still asleep. She woke up soon after, so we came into her room and Linda was holding her. We all sat and oohed and aaahed over her! She seemed a little disoriented and shy, but happy. More and more people started to come, so people started switching out who was in her room and who was in the rest of the house. Sherria, you and I stayed in her room with her most of the time. I had her on my lap when they decided to bring in the cake and sing to her. We sang and blew out the candle and she put her hand in the cake a little. 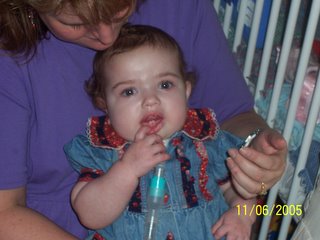 I think she was more overwhelmed by everyone being there with her and singing to her, so she wasn't that interested in the cake. A few people said "is it okay if she opens our present?" so we told them yes. So, she opened a few at a time. Melissa held her for awhile and then someone asked if she could sit up by herself, so I put her on the floor and let her play with some of her new stuff. About that time, Brent and his family showed up and met her for the first time. I left then to go talk to the people in the rest of the house, but Ria stayed in the room. My Pastor was here with his wife along with LOTS AND LOTS of people from church. Only one family showed up from my homeschool group - but I was so excited to see them because they had adopted a baby from Korea and she had finally gotten here about 2 months ago and I had not seen her yet. She was also about 8 months. Two good friends that I NEVER get to see showed up - Alison and Terri, but I didn't get to spend much one-on-one time with anyone. It was SOOO busy. It wasn't really crazy yet, that was the nice thing. Most of the time the kids were outside and noone really crowded the baby or hogged her or anything. About 3:30 everyone started to leave and Melissa and Paula had to leave a little after 4. Kaedy was in my lap, but dozing on and off. They brought in their present for us, which they, plus one other lady from my homeschool group, pitched in on. It was a large play yard (like the one the rugrats use). We were so excited!! I have never had one before, but we needed something to contain Kaedy and how far she could get from the vent. Linda is THRILLED! no trying to chase Kaedy around the house with oxygen and her ventilator!! LOL

Kaedy had a new trick, as of Saturday, so I showed it off a few times. She is now able to stand up with me just holding her hands!!! :-) We are SOOO thrilled. She loved showing off and everyone clapping for her. She LOVED the attention she got and just "ate it up." She was not at all overwhelmed or freaked or anything. She took it all sooooo well!

One of her favorite presents was the Fisher Price Musical Chair . My parents sent me the money to buy it for her and we gave it to her on Saturday. She just LOVES it!!! 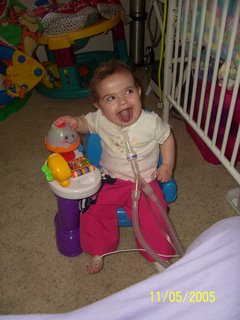 Brent and Kim bought her a Fisher Price Intellitainer. We are going to put it together today. I think it will be her den toy for the evenings when we don't have any nurse and we are cooking and cleaning up. I think she will like it a lot and it will keep her QUITE busy!! LOL. I had no idea they were getting her that.

I had a blast!! I loved spending time with all of you!! The drive was a little long. The traffic out of LA was yucky, but I loved Oklahoma. BEAUTFIUL and less smog! Your girls are BEAUTIFUL!! Your friends were so sweet and quite welcoming. The cake was pretty...loved the colors. I think Michael and Jim hit it off too!!! Oh, and I absolutely LOVED spending time with YOU!!!!!!

This was wonderful! I could pretend I was there. I am so sorry I was unable to come but it sounded like you had an awesome time.