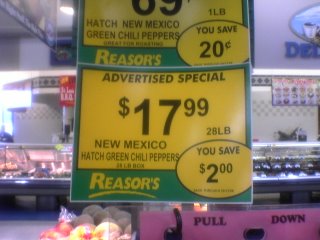 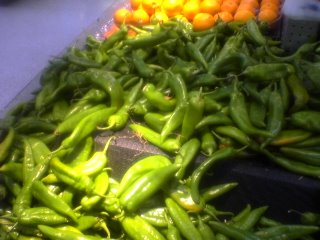 Well, it's official. I can get comfortable here in Oklahoma.

The only thing I have really missed from NM is the green chile. It was major culture shock to come to a place where when you say you want a chile cheese burger, they put texas type chili all over your poor patty!

After I had already been acclimated to the large deficiency in the Oklahoma cuisine, my ex sister in law came and stayed with us (from ALB). I took her to Ron's and paid NO ATTENTION when the poor thing ordered a chile burger. She was as shocked as I was when she got her burger covered with beans and texas chili. She was a really good sport, though, and didn't send it back. (like I had a few years earlier!)

One of the times Michael and I went to visit Albuquerque, we picked up a bushel of green chile. We rode all the way back from Albuquerque with it in the car, making our eyes (and mouths) water. I never did finish that whole bushel before our freezer gave out and I lost a few pounds of the chile.

Well, now the deficiency has been repaired! My sweet friend, Susan, who also hails from NM, told me that the store in Coweta (my new favorite grocery store...read earlier post) had NEW MEXICO HATCH GREEN CHILES! Reasor's also had them, even a little cheaper. I dropped in on her, unexpectedly, and got to smell her roasting the wonderful things!

The next day, I went to Reasor's and picked up several pounds. I was so excited to see them that, as you can see, I took pictures of them and the sign! A customer came around the corner and just stared at me. He said "is there something special about these that you need to take a picture of them?" So I told them how wonderful Hatch Green Chiles were. He just nodded and left, shaking his head. To him, I am obviously not a native Okie. But, with NM Green Chiles making their way here, I may never have to leave. :-)
at 11:22 AM

lol.. you crack me up.
I am glad that God has provided the desires of your heart.. in Oklahoma. ;-)