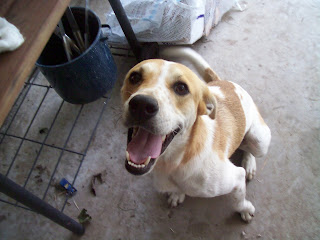 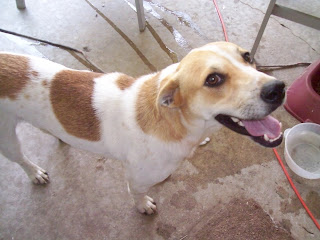 I haven't officially introduced Freckles yet, so I thought I would do that now. Freckles showed up in our yard July 21st. He was obviously under-nourished and in need of water. He had no collar. We gave him some water on our porch and he stayed there all night. The next day we put him in our backyard, got him some food and called all around to see if he had been reported missing. I also looked online on Craig's List and Dog Finder. Thursday we took him to the vet to see if he was "chipped." They said he was not chipped however he is "clipped." LOL. By Friday Michael said we were going to keep him so I called the pound to see when he would officially be ours. They said 7-10 days of feeding and caring for him. Michael took him to the vet on Saturday to make sure he was healthy and had his shots. He is now officially a member of our family.

Now don't laugh. I think God brought us this dog. I know the kids (especially Brittany) really wanted a dog. I said I would NOT get a dog unless he was house trained and wouldn't run away. I didn't know how we were going to find a dog that was those things. Instead, the dog found us. He is completely house trained and stays with us when we are outside. He has just started venturing a little further away from us, which I'm not happy with, but I am working on it. The vet said he is about one year old. That has been both a pro and a con. He is very easy to work with and eager to learn but he is still chewing on things. We have had a few stuffed animal casualties, but he is learning. He is very sweet and very good with kids. I think he has been beaten at some point because he cowers and hides if you get the slightest bit stern with him. I don't know if it was the former owners or if it was while he was lost. The vet said that should fix as we show him love and proper discipline.

The pictures above were taken about two days after he came here when he was still on the skinny side. (I used them to post for "found" dog) He is a little bulkier now although the vet said he won't get much larger. He is just about the perfect size. Especially since he thinks he is a lap dog!

Another wonderful by-product of having him has been for the little people in our house. Ethan and Kaedra were terrified of dogs (although we owned some during both of their lives) and Emily was freaking out around dogs too. Michael and I seriously did not want our children to be afraid of animals (except for the healthy fear of unknown animals, which I seem to be missing) so we had done things like have one of our friends bring her dog over to let them get used to him. When Freckles first showed up the kids were afraid of him, too, but now they LOVE him! They aren't afraid at all. Michael and I are thrilled with that!

What a cutie! Congratulations to Freckles on finding himself a nice family!

What a happy puppy! Look at that smile. When I was in high school, we had a dog that came to us in much the same way. We thought God had delivered him straight from heaven. So much so that my brother wanted to name him Manna! (We named him Charlie, because we didn't want him to rot after one day! LOL)