I Will Praise You in the Rain

Haven't had my iphone with me for the past two days, so I don't have any gratitude pictures. Doesn't mean I am not thankful, though! I have plenty to be thankful for...

Our whole family (minus Michael) has gotten some horrible virus that is running around. It started with Emily and just affected her as a cold.  Kaedra got it next, starting with a high fever and then a cough. We took her to Tulsa last Thursday to see the dr and make sure she was okay. The doctor did a culture, said her lungs sounded good and sent her home on some antibiotics.  Friday Kaedra wasn't doing too well, so we took her to a hospital here in OKC. They said that she had a spot of pneumonia, but they sent her home with some more meds.  Over the weekend, I had a few bad days of coughing and fever, too. Ethan didn't want to be left out so he joined us.  By Monday morning, I was really uncomfortable keeping Kaedra home. I couldn't tell if her lung sounds were getting worse (I am not really good with the stethoscope) and I knew she just wasn't getting better.  She was getting very worn out with all the coughing too. Brittany woke up sick as well.

That morning, Michael took Kaedra to the Children's Hospital in downtown OKC and they admitted her. They couldn't tell if the pneumonia was still there, but they said it had not gotten worse.  They decided to keep her just to make sure she didn't get worse and that we had support if she did.  Michael's work has been VERY supportive about him having time off. They even brought some food for him up to the hospital today.  It has been such a blessing to have him at the hospital, so I could stay home with the other kids.

Early this morning,  Ethan woke up with a fever of 103.9. I used ibuprofen and wet washcloths to bring it down.  I took him to the doctor and he has some sort of throat infection. She gave him an antibiotic and some nasal steroids. Twice today his fever has gone over 104.  On top of that, I thought I was getting better, but I started having fevers again today. Hoping it is just from lack of sleep (Have gotten all of about 10 hours of sleep in 3 1/2 days) and that I will be better tomorrow. I need to take Michael some clothes and his meds and I would love to see Kaedra.   (although we don't know if I WILL see her, we don't want to make her sad that I can't stay)

That being said, there are still plenty of blessings:
Blessed that Michael hasn't gotten sick
That Michael is able to be at the hospital with Kaedra
That his job is being understanding
That we homeschool so the kids aren't missing lots of school (well they are, but we will make it up)
That Kaedra hasn't had a bad bout of pneumonia this time around
That a friend of Michael's from high school (that he hasn't seen since) got to go up to the hospital and reconnect with Michael and pray over Kaedra today
That Kaedra is getting such great care at Children's Hospital. 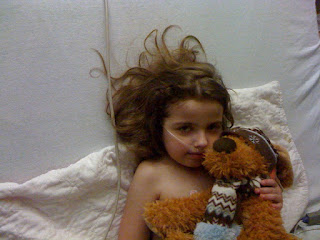 Thank you Lord for all of our blessings! You are an AWESOME God and we LOVE you!
at 12:08 AM

I pray for wholeness and wellness for all of you.

I am so encouraged by how well you and your husband are handling all of this. (((hugs))) Yay for understanding jobs and good Daddy's that are so willing to help love on, and take care of their little ones, along with Momma!

I am still praying for your family and hope that all of this sickness leaves soon!