Quality of life: This is a topic near and dear to our hearts.

Before she was trach'd, our doctor was told that he should think about taking Kaedy's case, because "it probably wasn't worth it."

My favorite comment, though, was made by my darling hubby. Kaedra was two weeks old and we were at a "round table discussion" with all of her doctors, nurses, speech therapists, respiratory therapists, etc. Michael asked when we would be able to bring Kaedy home and the doctor in charge told him "You have NO idea what you are getting yourself into." Michael had a flash of anger and told him, "You're right, we should just sell her." Everyone but the doctor laughed nervously but I think it gave them a reality check....what was our alternative?

From the moment she was conceived, we were in for the long haul. We don't care what that long haul consists of.

A few months later there was talk of institutionalizing her. I can't tell you how much it broke my heart to hear that there were even institutions that would take babies like Kaedy - that they would not be home with their families!

Today is her two year birthday. If you have met her, or even if you have seen her pictures, there is no question that she has a spectacular quality of life. She is the happiest child I have ever seen. She loves everyone and loves to be the life of the party. And, even before she was off the vent for most of the day, she was able to play and climb and go to church and make friends and all the other things that make a child's life good! Now she is talking, she is off of the vent almost all day (yesterday was 11 1/2 hours!), running around the house and getting into everything!

Looking back, it makes me sick to think that medical people didn't think her life was "worth it." Our doctor has mentioned taking her to see those doctors, but, to be honest, I don't know if I can stomach it. Maybe we will send them video. ;-)

Anyway, this is the article that got me to blogging on this. There is a big debate going on in the UK about euthanasia for babies with no quality of life.
http://www.guardian.co.uk/medicine/story/0,,1940510,00.html

Here is a quote from the article: "The college says the Nuffield's working group should "think more radically about non-resuscitation, withdrawal of treatment decisions, the best-interests test and active euthanasia as they are means of widening the management options available to the sickest of newborns"."

Think of this: Kaedra was once considered the "sickest of newborns." 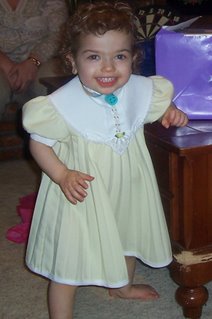 Don't you just love it when our God proves the Dr.'s wrong! I sure do! What a miracle baby you have! What a testimony to HIS faithfulness! :-)

Those pics were awesome! Happy birthday Kaedy!!! Kahri she is a beautiful little girl! I can't believe how big she is now...I almost didn't recognize her! God is ALWAYS in control!!! Congratulations on you upcoming addition!!!!