After the death of my beloved Mercy-cat, Michael graciously told me I could get another cat whenever I wanted. That was really very sweet of him since he is not a huge cat fan. I decided I really wanted a Maine Coon. I had one before - named Shakespeare and he was such a great cat. I started looking for Maine Coons online and did not find any in shelters nearby. The closest I came was a Maine Coon/mix in Missouri. I decided I might buy one until I saw that they went for in between $500-$900. (Shakespeare was from the pound) I asked God for a Maine Coon kitten knowing that was the only, and best, way to get one. The same day, God nudged me to post on tulsafreebay that I was in search of a Maine Coon. The next morning I had a response from a sweet lady who was giving away her Maine Coon and wanted to find him a good home. She had read my blog about Mercy and thought we would be a good family!!! We went and got him later that day. His other family had called him Jersey, but we call him Tempest (Tempe for short) because of his colors - he really looks like a storm cloud. He is absolutely beautiful and very sweet and fun. I just love the temperament of Maine Coons. Our only problem with him so far is that he is much more playful at night (like 4am) then he is during the day. We need to get him on OUR schedule! LOL. He reminds me of a baby who has gotten his days and nights mixed up. He gets along fine with our dogs and our kids love him. He is cuddly, playful and beautiful, what more could we want??? Here is one of he pics his previous owner sent me when she offered him to me. We don't have our own pictures yet, mostly because I don't have my camera next to me at 4am. 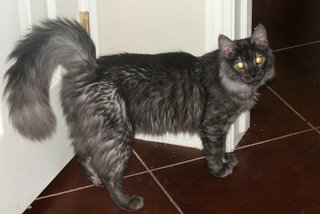 This is one of Kaedra's songs... She is a wonder of God's own creation and as far as they see they can offer no explanation (for how wonderful she is doing!)

Enjoy and think of our miracle baby!


Doctors have come from distants cities, just to see me
Stand over my bed, disbelieving what they're seeing

1-They say I must be one of the wonders
Of God's own creation
And as far as they see, they can offer
No explanation

Newspapers ask intimate questions, want confessions
They reach into my head to steal, the glory of my story
(repeat 1)

People see me I'm a challenge to your balance
I'm over your heads how I confound you
And astound you
To know I must be one of the wonders
(rpt...1)

Thirteen Big Projects I have going

1. Redoing my laundry room - cleaning, organizing and moving a cabinet in there.

3. Redoing my living room - adding more school books into it and making me a desk

4. Redoing my back porch - moving a shelf unit out there and organizing all the outside doo-dads.

5. Redoing my under-the-stairs closet - take everything out of it and put Kaedy's toys and vacuums in there.

7. Redoing corner of the Den - putting hutch into den and moving out Kaedy's Kidcart and stroller.

8. Redo front porch - add some pretties to it, clean it up, plant flowers in pots and plant tree.

9. Plant mini garden (will be a salad garden) and morning glories and moon flowers

10. Redo Emily's room - (BBBBBBBBBBIIIIIIIIIIGGGGGGGGGGG project!) Move her clothes into her closet, get rid of a lot of toys, and just generally clean and reorganize.

11. Getting ready for a church garage sale - gathering all my cool clutter for them.

This is my ringtone

This is my ringtone, so unless I have a special ringtone designated for when you call my cell phone...I am hearing this! :-)

Here are the rules: Once you are tagged, you must post 6 [six] things about yourself, which are either weird, unusual, habitual or just plain fun to hear about (and true!). Once you post these things in your blog, you must gently tag six others, who then, must read words like these and follow the same rules you did. In addition to listing those you tag, you should nag them a little with a comment or two. After that, all reprimands for ignoring the game and rules are solely physical and mildly serious.

1. I absolutely love being in the water, it is probably my favorite place to be. However, I really really do not like GETTING in water. It takes me quite awhile to actually get into the water, then I am fine.

2. I really love to eat liver and onions.

3. One of the closest people to me, I have only met once. (Brandi)

4. My license plate says "Peculyr." I am peculiar in the biblical sense: set apart for God.

5. I like spiders. I usually don't kill them unless they are brown recluses. Otherwise, I put them in my hand and take them outside. I don't mind other bugs and don't usually kill them, either, but I don't like swarms of anything. I would love to have a tarantula but the rest of my family is not keen on the idea.

6. I want to get an old truck (1956 Dodge) and restore it. I know little to nothing about engines or bodywork but plan on figuring it all out eventually. 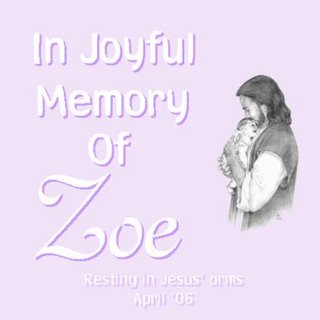 If you have been reading my blog for any length of time, you are familiar with my wonderful friend Brandi. Brandi is the mother of 7 children so far, the 7th now awaiting her in heaven. We rejoiced with them at the news of Brandi's pregnancy and we rejoice with them now that their darling daughter is forever with Jesus. However, because we are made of flesh, we also mourn the lost dreams of this family and their chance to ever hold little Zoe this side of heaven. Please keep Brandi and her family in your prayers.
at 9:40 AM 1 comment:

Kutless - Shut Me Out

Shut Me Out
By Kutless
CodesAndLyrics.com
at 8:49 PM 1 comment:

In Honor Of my Beloved Companion for the past 17 years: Mercedes Valentine 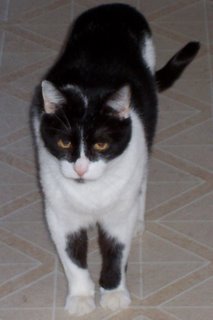 We had to put my 1st baby, Mercy, to sleep yesterday because he had diabetes. He hadn't been looking good for a few months and we thought it was still an allergy he had. Once we realized it wasn't the allergy, we thought maybe he had worms. We had him tested this week and it wasn't worms either. So, Michael took Friday off, figuring what was probably going to happen, and he and Mercy went to the vet and only Michael came back. It was a really rough day for me. In honor of him, I am making a Saturday Seventeen.

1. He was born on Father's Day of 1989. My college roommate and I went to get kittens from an ad in the paper. She got an orange cat and named him Micky and I got the runt and named him Mercy. They had identical markings but one was orange and white and the other was black and white.

2. I took him to get spayed but he ended up neutered. It took me quite awhile to get over calling him "she."

3. I named him Mercedes because he zoomed around everywhere, as a kitten. His middle name was Valentine because he had a heart shaped black mark on the back of one of his legs.

4. I used to take him to work with me when I worked at UNM. I helped migrant workers' children earn their GEDs. He was their "mascot."

5. One time he got scared and ran away from work. I found him by his extremely loud cry. He had burned part of his paws on the hot pavement and had to wear bandages on his paws for about a week.

6. When he was declawed, they messed it up really bad. His paws were sensitive forevermore. You could really tell who he trusted, by who he would let touch his paws. They also left one partial claw in there.

7. I had only had dogs before him so I trained him like a dog. He would sit, stay, and fetch. He used to meet me at the door everyday too. And, occasionally, when he was in a good mood, he would walk on a leash.

8. Because I was in college when I got him, he had to work hard to get my attention away from my books. He would lie on top of my books and papers to get attention. He kept up with that for the rest of his life, loving to lay on filler paper or open books.

9. When I got another cat, he didn't purr for about a year. I guess he forgave me after that.

10. He didn't like to ride in the car. He would curl up where the passenger's feet would be and meow the whole time.

11. He once saved my ex husband and I from a fire. We lived in an apartment that was long with one hallway. I got up one morning to start some water boiling and got back in bed to keep warm. A potato chip bag accidentally caught on fire and then spread up a decorative towel on the wall. The whole wall went up in flames, but David and I had no idea. Mercy came in meowing frantically. We tried to ignore him but he started biting us and trying to pull at us. We got up to see what on earth was up and saw the fire. We were able to get past the burning wall just in time before the hallway was completely blocked off and we would have had to jump from a 2nd story window. He was our hero. :-)

12. He used to sleep on my head. It was very cozy in the winter.

14. The last few months he had started becoming very hungry, to the point of ravenous. Although we understand why now, and it isn't really funny that he was so hungry, a few of our favorite memories were because of this.... One day we were eating pizza and we had the pizza on the coffee table. He picked up a whole (large) piece of pizza and tried to sneak away. The pizza was bigger than him and it was so funny watching him try to be sly.

15. His favorite place to sit was on the back of the couch. If I was eating on the couch, he would put his front paws on my shoulder and try to climb onto my plate or take food out of my mouth.

16. He was very friendly. He didn't have the usual "uppity cat" attitude. He always came to see whoever was here visiting and see if they wanted a lap companion.

17. He ruled our roost. Even though Madison (our lab) was 10 times bigger than Mercy, Mercy would keep Maddi in line with a quick slap on her nose. Shooky quickly learned who was the Alpha Male in the house and, although he tried to test him, Mercy consistently proved he was the "bigger man." Our little, old man cat, kept our two, silly, dumb dogs completely out of his way or would remind them with a little whooping. It was actually quite comical to watch.

I had him 1 year shy of half my life and I miss him terribly. I hope he knows how much he was loved.